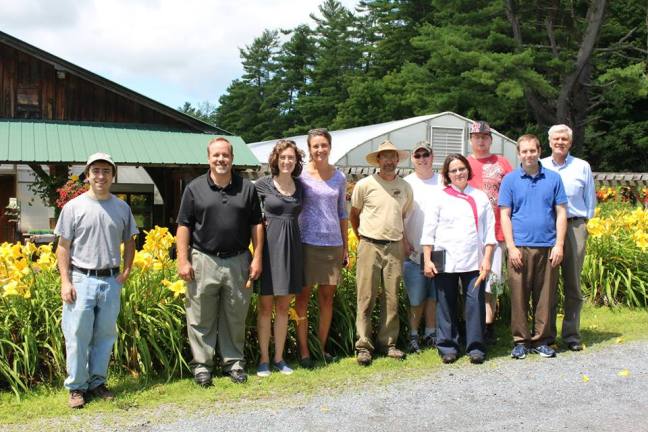 How can Vermont First help create connections between Vermont accounts and Vermont producers?  I asked chefs and managers of our Vermont campus accounts that I visited this spring.

Each week this July, we have organized tours in the region of each Vermont Sodexo campus.  Our goal is to use this time to strengthen two types of communities:
– Build closer connections between campuses and their farms and food business neighbors
– Community of chefs and managers at Vermont accounts, building awareness within Sodexo surrounding the goals of Vermont First. 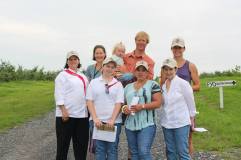 nate about everything apple.  Sandi Earle, Executive Chef at Champlain College, met and thanked the crew who make the apple pies she serves in her dining hall.  We watched an incredibly efficient crew pack the remains of last years apple crop into retail bags.  We poked our heads into the newly constructed cidery.  We ended with a stroll up the hill to see the new apple trees. 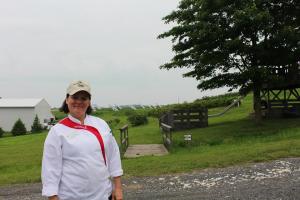 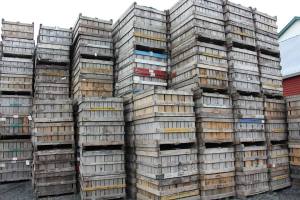 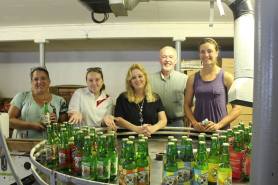 ch Vermont Sweetwater was ahead of the curve years ago.  The company began with a Vermont Maple Seltzer in the mid-1990s, made using sap from their neighboring sugarmakers in the Poultney area.  In a retro-fitted dairy barn which houses all of their production and storage, we sampled their creative additions to the product line of natural sodas, with flavors like Rugged Mountain Root Beer and Mango Moonshine. 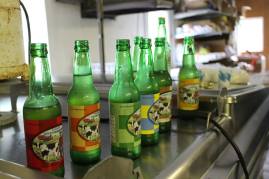 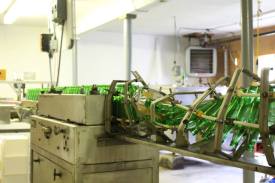 UVM and Champlain College went to:

Intervale Food Hub: Less than a mile away from the UVM campus, Interva 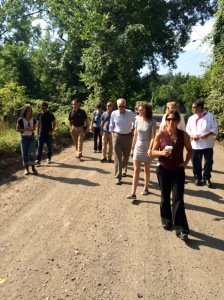 le Food Hub aggregates products from farms across Vermont and distributes throughout the Burlington area.  This was our first visit since Intervale Food Hub became an approved vendor this summer, becoming a gateway for many small to mid-scale farms to sell into UVM.  Our team got to see the packing room where all products get aggregated and packed out to then be delivered to three sites on UVM campus.  Thanks to Bobby Young and Sona Desai at IFH for being great partners! 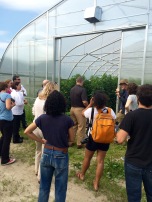 Opening the door to their new greenhouse packed full of tomato vines, Andy explained how they expect to produce over 20,000lbs of tomatoes out of this one greenhouse. As Andy fielded questions, it was apparent how the combination of his experience, technical knowledge, calm manner, and calculated approach to farming were a good example of the “something right” that has dictated this long life of ICF.

Diggers’ Mirth: Part-owner Hillary Martin made it clear to our group 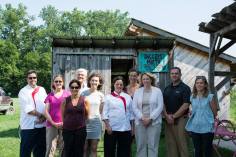 that the word “mirth” in

Diggers’ Mirth is truly a fact of life on this farm.  Quality of products grown at Diggers’ Mirth as well as quality of life seem to hold equal weight.  Since 1992, they have enjoyed slow growth, experienced very little debt, and have enough shared responsibility to not over-tax any of the owners and workers.
A noteworthy model.

Catamount Farm: It seemed only fitting that chefs and managers f 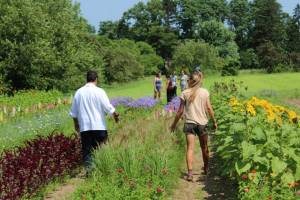 rom UVM should visit the UVM farm, Catamount Farm.  Our tour guides, Isabella and Amanda, were part of the UVM Farmer Training Program, a 6-month intensive training program for aspiring farmers and food system advocates.  In addition to seeing where our food comes from when we purchase from Catamount Farm, we got to see first hand all that Isabella and Amanda have learned in just a few short months of being in the program.  To top it off, Isabella whipped out a pocket knife to slice off some vegetable samples during our stroll through the fields. 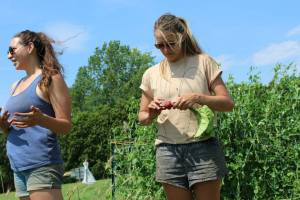 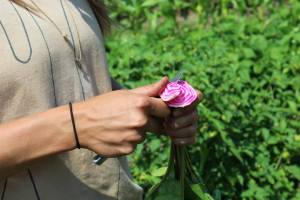 Vermont Soy: I have to be honest here – the places we visited with this group had a degree of interconnectedness that I had not planned for.  As we entered Verm

ont Soy, Michael Carr, Business Manager, asked if we were indeed going to Boyden Valley Winery later that afternoon.  Yes, I confirmed.  Michael went on to say how the Boyden’s had just planted a large crop of soybeans for Vermont Soy, and circled around to explain that the okara, a by-product from tofu production, then went back to the Boyden’s to feed their cow herd.
Since 2007, Vermont Soy has worked closely with Vermont farmers to grow soybean to be used in Vermont Soy products. Tom Fondakowski, General Manager at Johnson State College, explained how he likes using the tofu scramble product from Vermont Soy in residential dining. 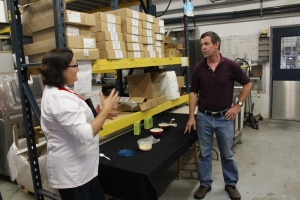 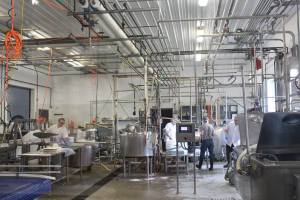 Center for an Agricultural Economy: Just across the street from Vermo 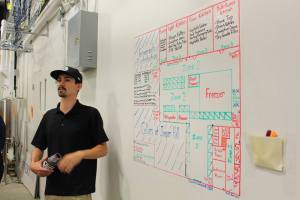 nt Soy sits the 15,000 sq ft facility of the Center for an Agricultural Economy, the home of the Vermont Food Venture Center.  For full disclosure here, this is where I worked before coming to Sodexo!  A lot has happened since my last day back in February, from new products being made to new equipment coming in the door.  In addition to the community building, market development for farmers, and food business incubation work they are known for, what’s clear in walking away from a tour with Connor, Sarah, and Alissa is that they’re a great team. 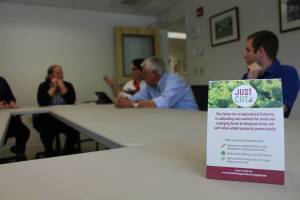 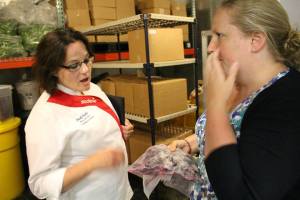 River Berry Farm: A backbone of organic farming in Vermont, River Berry Farm knows what they’re doing.  In Fairfax since 1992, they chose their spot for the river bottom soil.  After we arrived, co-o 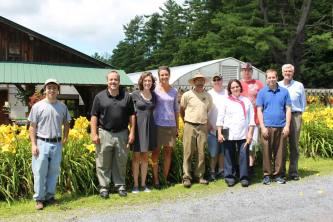 wner Dave Marchant pulled up in a golf cart, having been harvesting greens in a distant field.  I think one thing I deeply admire about experienced farmers is their ability to quickly calculate what “makes sense.”  When asked about the history of the farm stand that we stood in while talking with Dave, Dave simply responded it was the result of needing a place to send folks who stopped by looking for a head of lettuce.  So he built them a farm stand that operates with an honor code system.  Create your own market that requires very little management to run – makes sense. 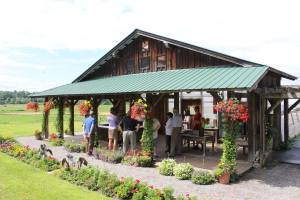 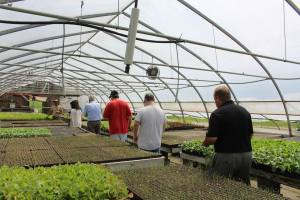 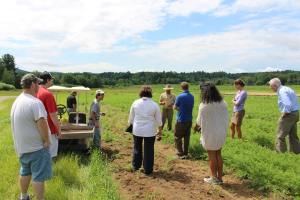 Boyden Valley Winery: Going on their 5th generation of ownership and 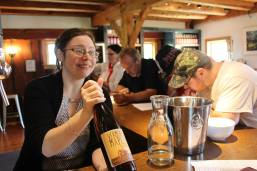 business management, the Boyden’s are a staple of Vermont’s farming economy.  Operating at least five different businesses under the family name, from maple produ

ction to a winery to an event center to growing soy beans for Vermont Soy, they have discovered a way of creating business opportunities between and within generations on this, rather large, plot of land.

For more photos from our travels, check out the UVM Dining Facebook Page.