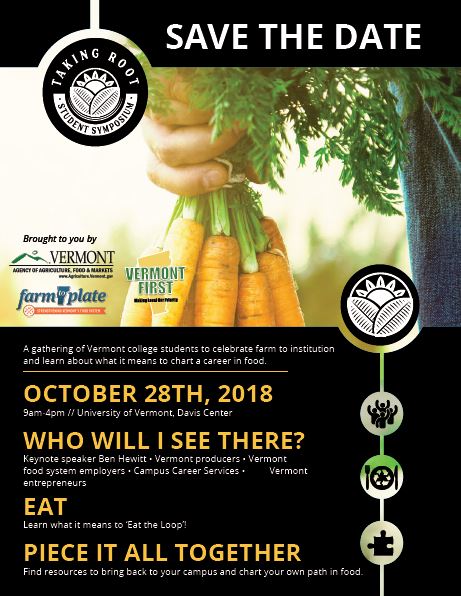 We couldn’t be more excited to announce that we are hosting the Taking Root Student Symposium on October 28th at the University of Vermont, in partnership with Vermont Farm to Plate and the Vermont Agency of Agriculture.

This symposium is designed for all Vermont college students to celebrate farm to institution and learn about what it means to chart a career in food. We are pleased to

share that our keynote speaker will be Ben Hewitt, a Vermont-based author of many books including The Town That Food Saved and Making Supper Safe. Throughout the day, students will learn about:

And let’s not forget about lunch!

Are you a Vermont college student interested in attending? Here’s what you need to know:

I am excited to attend the Taking Root Student Symposium at UVM because I was inspired by Ben Hewitt’s book ‘The Town that Food Saved’ when I was introduced to it as an undergrad. Also, I will be looking to find employment soon, so getting to learn more about current food-related positions and Vermont-based employers is a great opportunity. Overall, I can’t wait to meet people with similar passions as me and people who want to learn more!
– Ann Chiarenzelli, UVM Food Systems Master Student & Taking Root attendee

The statewide college student gathering is a perfect opportunity for our students in our learning community “A Call to Action: Building Sustainable Communities”. […] The symposium lands at a perfect place and time to support our goals; we hope that many students, faculty and staff from other Vermont colleges and universities attend.

Here is a glimpse of some of the panelists, producers, and employers you can expect to see there!

Stay tuned for more to come! Be sure to follow us on Instagram @vermontfirst for more information!

As she tallied up the final numbers, Sodexo’s Vermont First Coordinator Annie Rowell already anticipated the decrease in Sodexo’s local purchases for 2017.  Launched in 2014, Vermont First is Sodexo’s commitment to increase local food purchasing at all of Sodexo’s Vermont accounts, which helps achieve Vermont Farm to Plate’s goals of increasing instiutional consumption (Goal 2) and increasing local food production (Goal 7). Vermont First is also aligned with Farm to Plate’s local food definition: Raw products grown in Vermont or within a 30-mile radius around the state borders or food manufactured within the state.

Over the past three years, Vermont First has become a revered best practice in institutional local food procurement, setting the standard for how to strategically leverage statewide institutional spend, actively engage and collaborate with statewide stakeholders, and transparently track local purchasing.  “VT First has forged a path for thoughtful, intentional, and systematic calculation and communication of institution’s local food procurement,” shares Abbey Willard, Food System Chief for the Vermont Agency of Agriculture, Food and Markets, as well as a member of the Vermont First Advisory Board. Why, then, was Rowell not surprised to see a downward trend for Vermont First’s local purchasing between 2016 and 2017?

Abbie Nelson of NOFA-VT/VT FEED and member of the Vermont First Advisory Board, explained the 2017 findings best: “The reality is [Vermont First] is getting penalized in the numbers for getting better at tracking.”  Every year, the Vermont First Advisory Board (VFAB), made up of fourteen Vermont food system stakeholders, reviews Sodexo’s Vermont food purchasing totals and identifies opportunity areas for purchasing more Vermont products.  Over the past year, Vermont First dove deeper into the supply chains of regional brands Hood, Cabot Creamery, and Black River Meats’ Northeast Raised Beef to explore opportunities for Vermont producers. After participating in this process as a member of the VFAB, Jake Claro, Director of Farm to Plate, observed, “From the very beginning, Sodexo’s Vermont First has been an exemplar of transparency and integrity, a model for how institutions can accurately track.  Vermont First’s willingness to be transparent in their accounting and open to critical feedback reflects a true commitment to Vermont farm and food businesses and the food economy of Vermont.”

Black River Meat’s Northeast Raised (NER) beef brand was created on the scalability of a regional model, while also remaining focused on bringing more Vermont beef producers into their folds. In 2015 and 2016, VT First counted 100% of NER beef as local, as the animals were either raised or slaughtered and processed in the state. Sodexo significantly increase NER beef purchases during that time.  In reviewing VT First totals, however, it became evident to the VFAB that Farm to Plate’s definition for how raw, cut beef should be counted for ‘local’ was unclear.  Farm to Plate’s intent was that all raw, cut animal protein could only count as local if the animal was raised (or spent a significant portion of the animal’s life) in Vermont, regardless of whether the animal was slaughtered and processed in the state.  While all animals in the Black River Meats’ NER beef supply chain are slaughtered and processed in Springfield, VT, 20% of the animals were Vermont-raised in 2017.  (As a note, 100% of Black River Meats’ Vermont Grown lamb and pork is raised in Vermont.)
As such, in October 2017, Vermont First modified their tracking to count only 20% of NER beef purchases as local. While this change negatively affects Vermont First’s 2017 totals, it means Vermont First will be able to track the growth in number of Vermont raised animals in NER’s supply chain over the long term.

“Better tracking. More transparency. At the end of the day, that’s what counts!” Peter Allison, Executive Director of Farm to Institution New England, sums up.

Much like NER Beef, Hood and Cabot Creamery are brands that are dependent on the regional infrastructure needed to aggregate, process, and distribute dairy products.  Dairy is Vermont’s largest agricultural industry, and Vermont produces 63% of the milk in New England (Vermont Milk Matters Report, 2016). Tracking aggregated fluid milk volume back to individual farms is a laborious and complicated process, but necessary to understand how much of the milk in supply chain of companies like Hood and Cabot comes from Vermont farms.  With the assistance of Hood and Cabot, Vermont First narrowed in on the Hood and Cabot products that meet the Vermont First definition – either produced or manufactured in Vermont +30 miles.

Overall, more than $250,000 of beef and dairy spend in 2017 no longer qualifies as local for Vermont First. As a result, Vermont First’s 2017 local purchasing totals were $2.6 million, decreasing from 15.5% local in 2016 to 13.74% local in 2017.  While the numbers show a decrease, the 2017 totals tell a more accurate story of the volume of products purchased that were either produced or manufactured in Vermont.  “The purchasing numbers reported by the program are not window dressing, but an honest accounting of progress and an integral piece of feedback Sodexo management at all levels uses to inform purchasing decisions and improve institutional market access for Vermont farm and food businesses,” said Claro.

Looking ahead to 2018, Vermont First is focused on identifying and purchasing ‘Priority Products’ that are best-suited for Vermont production and that currently or have potential to be used in institutional dining.  The growing list of Priority Products will inform chefs which products are grown or manufactured locally and alert producers about the local products Sodexo is looking for.

Priority Products are identified with support from the VT First Advisory Board, Sodexo’s local produce distributors, and Vermont’s Farm and Forest Viability Program, among others. For instance, one priority product that was developed in response to institutional markets seeking a 100% Vermont-raised beef product was Precision Valley Specialty Meats’ hormone and growth promotant-free beef, which is a ground beef product made from transitional dairy cattle (cattle that are no longer productive for dairy).  Precision Valley offers Vermont dairy farms a reliable premium for cattle that would otherwise be sold at highly-fluctuating regional cattle auction prices. Currently, all Precision Valley cattle come from dairy farms in Addison County and are slaughtered and processed in Springfield, VT. 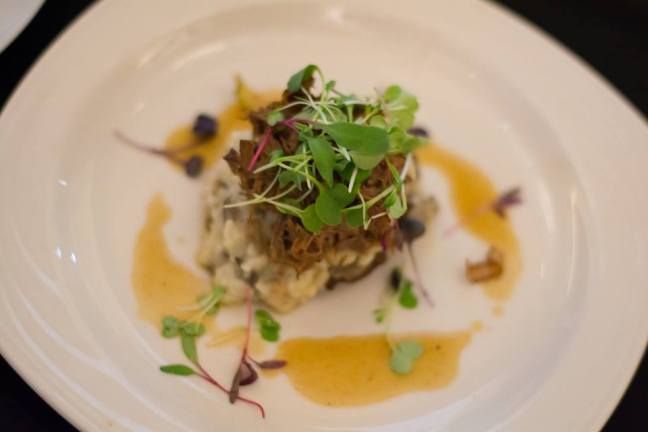 Twenty years ago, Vermont restaurants began marketing their commitment to source local and fresh ingredients under the brand of the newly-minted Vermont

Fresh Network.  In many ways, this network brand was outside the realm of typical marketing strategies, largely because the widespread consumer hunt for local food was barely on the horizon.  Ahead of its time on the local food front, Vermont Fresh Network’s strongest emphasis, as prominently displayed in its name, was the other key word: ‘fresh’.

All good things are associated with ‘fresh’.

Crisp, ripe, just picked/baked/chopped, high quality, good tasting.  Years before twelve-year-olds began asking their waiter where the roasted chicken on the menu came from, Vermont chefs and restauranteurs were looking to their trusted Vermont farmer neighbors to provide the freshest and highest quality ingredients.

Today, both in Vermont and around the country, institutions are doing the same thing.  “It has taken longer for our local food system to become robust enough to allow institutional kitchens to express their purchasing muscle within the system,” explains Meghan Sheridan, Executive Director of the Vermont Fresh Network.  “As Vermont’s food system continues to grow in size and diversity, it is ever more possible for institutional kitchens to source local and regional products.”

Vermont institutions are now qualifying to join the Vermont Fresh Network.  Four of
Sodexo’s Vermont campuses are Network members: University of Vermont, St. Michael’s College, Norwich University, and Champlain College.  In addition to membership, St. Michael’s, Norwich, and UVM join 51 other restaurants and a few institutions in receiving the recognition of Gold Barn Honorees, an award recognizing chefs who are exceptional partners with Vermont farmers. Explore the list of Vermont Fresh Network members and our fellow Gold Barn Honorees here.

As demand for local and sustainable food in cafeterias continues to increase, “culinary excellence is much more of an expectation, cooking is an art and [today’s college student] appreciates a chef’s passion for their trade,” shares Melissa Jordan, Sodexo’s Vice President for Strategic Alliances.  “The days of preparing large masses of commercially purchased ingredients in the back kitchen, bringing it out front and ‘parking it under heat lamps’ is not going to fly with today’s college student,” says Jordan.

The role of institutional chefs has become widely recognized and revered.  In a November 2015 Burlington Free Press article, the spotlight was on UVM Executive Chef Kate Hays.  “The progress we have made [in the] two and half years I’ve been there in terms of local food has been amazing,” Hays reflects on her experience in shifting from running restaurants to institutional kitchens.  Currently, UVM is in the process of opening a new dining hall that doubles as an educational center for sustainable and healthy food, and forging new partnerships with local producers.  “[We’re] really breaking all expectations,” says Hays.  Read the full interview here.

Serving thousands of meals per day throughout the year to diverse communities, institutional markets are seen by many in the food system world as the holy grail of local market opportunities.  While we cannot overlook the big questions still looming on the horizon, from institutional market viability for local businesses to optimizing food access for economically-challenged populations, we enjoy pausing for a moment to reflect on this evolution in institutional culinary trends.    From statewide recognition of our chefs for their culinary prowess to receiving best in class awards for volume of local purchasing, we are proud of our engagement and responsiveness to the Vermont community’s demand for culinary excellence in serving fresh, high quality, local food to our campus communities.

With this, we roll up our sleeves, dust off our aprons, and get back to work.

The experience and perspective of this strong group will be instrumental in moving the needle forward on Vermont First objectives.