Since it was first detected in December 2014, the highly pathogenic avian influenza (HPAI) has hit the US egg industry with tremendous force. In just over 6 months, HPAI has infected and killed 48 million birds in 15 states.  Avian influenzas are spread by wild bird flocks along their migratory routes. Therefore, in addition to being highly contagious, HPAI is also highly mobile, which explains the massive geographic spread of the disease across the west and mid-west.  It bears repeating that this is not a food safety issue – it is a bird health and egg and poultry supply issue.

The manufacturer and food service industries have been hardest hit by this outbreak, more so than the retail market.  Large manufacturers and many food service companies primarily use eggs in a liquid or powdered form.   Liquid egg producers have been particularly affected by HPAI, as over 80% of infected birds were dedicated to supplying the processing egg industry (typically referring to liquid pasteurized eggs), according to the New York Times May 2015 article.

As of August, there have been no new cases reported.  The chaos HPAI wreaked from December to July, however, is massive and devastating.  Absorbing and recovering from the aftermath will continue for months, if not years.

In 2014, Sodexo announced its commitment to purchase 100% cage-free eggs through prime vendors.  HPAI entered the scene shortly after making this commitment, and cage-free eggs are now both in incredibly low supply and have steeply increased in price.  Price increase among Sodexo’s contracted suppliers has ranged between 15%-50%, cage-free eggs being on the high end of that range.

There are many ways Sodexo has responded to the limited egg supply.  Many accounts have implemented menu shifts to accommodate unpasteurized egg use when not serving to vulnerable populations.  Some recipes have been altered to not require eggs.  Managers, like Amelia Heidenreich at Norwich University, are providing training to staff and clients about the impact of the avian flu. As a company, Sodexo’s supply management is directing the pasteurized eggs that are available to first go to our accounts that serve vulnerable populations, like hospitals and senior care homes.  And as a final measure, in some cases Sodexo’s customers are seeing the price increase for products using eggs as an ingredient.

WHAT DOES THIS MEAN FOR VERMONT?

There has been no reported case of HPAI in the state of Vermont, and work is being done to keep it that way.  In the face of this national crisis, “our regional producers take biosecurity very seriously and are looking to make sure their facilities are up to par with anything that my potentially happen next year,” explains Sean Buchanan of Black River Produce. He added, “This will surely increase their operational costs.”

Still, the true market opportunity for Vermont egg producers remains to be seen.  “Based on our scale, Vermont poultry farmers do not produce enough poultry [and eggs] to take advantage of any supply disruptions in other parts of the country,” Buchanan noted.

Jackie Devoid, co-owner of Maple Meadow Farm, has seen an increase in order

s from regular customers who are not able to source liquid or powdered eggs.  As a result of prices going up across the board,
Maple Meadow’s cage-free eggs have become more price-competitive with non-local cage-free eggs. “As the price point becomes more competitive, and because it is a local product, our customers are looking to Maple Meadow,” Devoid observed. 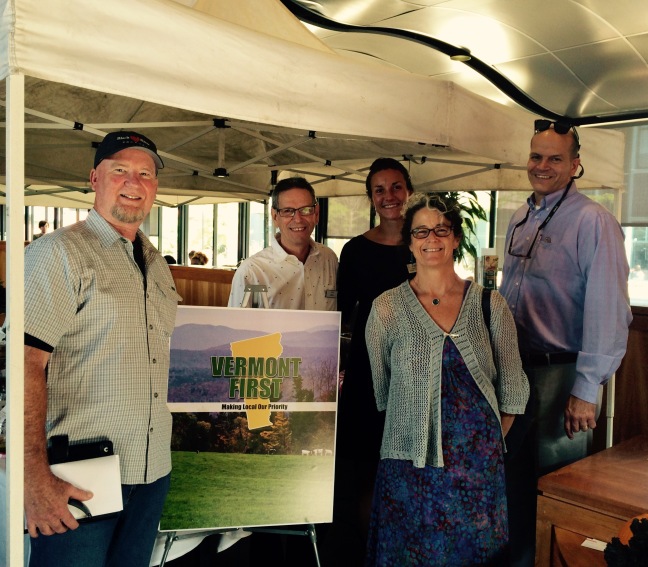 This was a real question – my favorite question – I fielded this past Wednesday.

I think the more accurate summarizing remark of the local food fall fest lunch at Champlain College came from a first year student who strolled up to the spread under the white tent in the middle of the dining hall.

“I’m so overwhelmed, where do I start??”

I knew how she felt, as I had shared the same sentiment when I walked in that morning as Jimmy Fanton, Sandi Earle, and their dining team were finishing setting up. 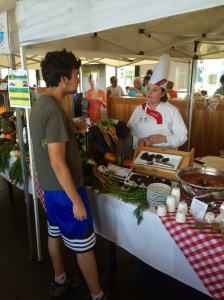 (Special thanks to our friends at Black River Produce – who stopped by the tent – for sourcing the local fruits and veggies for this event!)

While the menu was indeed complex, enticing, and certainly a showcase, many of the items were taken straight from the resident dining menu.  This event was an opportunity to bring attention to the work already being done using local ingredients in resident dining dishes, and encouraged students to be on the lookout for more.

As for my recommendation to all the ninja’s out there: it’s hard to go wrong with throwing back a swig of the fresh juice with ginger. It’s rugged and has a surprise spicy kick at the end – just like you!